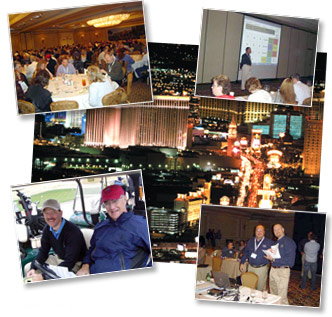 The Shoptech User Conference was a huge success with hundreds of E2 users converging on Las Vegas, NV for 3 days. The conference was kicked off by dynamic keynote speaker Don Reynolds with his analysis of the world economy and competing in a global marketplace.

The entire conference was dedicated to networking with other Shoptech customers, training sessions on all areas of the E2 Shop System and seeing the future direction of E2. A great time was had by all on what will go down as the best Shoptech User Conference ever!!

The golf outing at beautiful Royal Links Golf Course was won by Kevin Trem and Lee Trem of Arc Drilling along with Rich Ehemann and Paul Ventura of Shoptech Software.

A huge thanks goes out to the Shoptech customers that attended the conference. We sincerely appreciate your loyalty and know that our success is completely dependent on your success.